Tyrannosaurus rex Among the Bottom Feeders 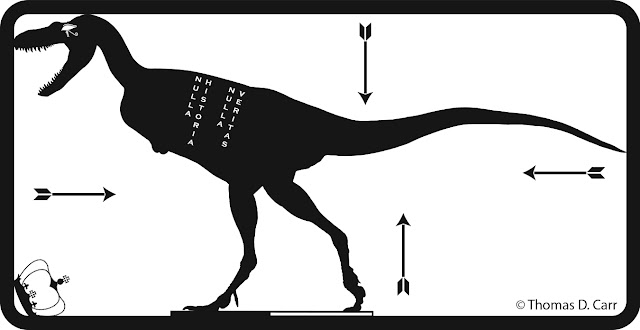 Over the past few weeks I’ve compiled data on 96 Tyrannosaurus rex fossils that are for sale on eBay, and I present the results here. This survey gives some insights into where the fossils are being collected, which fossils are most frequently sold, the prices sought, and where the sellers are located.

In summary, this is a snapshot of the low-level background noise of the fossil trade that does not conceal itself from the public eye. I take the fossil identifications at face value, since it is more important in this case what it is that people think they are selling (and buying) than what the objects actually are. For what it is worth, I do think that most - but not all - of the identifications are taxonomically accurate.

From where are the T. rex fossils exploited?

The fossils are collected in Wyoming, South Dakota, and Montana. As shown in the graph, Montana is most heavily hit. This exploitation of the northern Rocky Mountain Region for small and isolated T. rex fossils is the same as that of the big-ticket skeletons of T. rex. 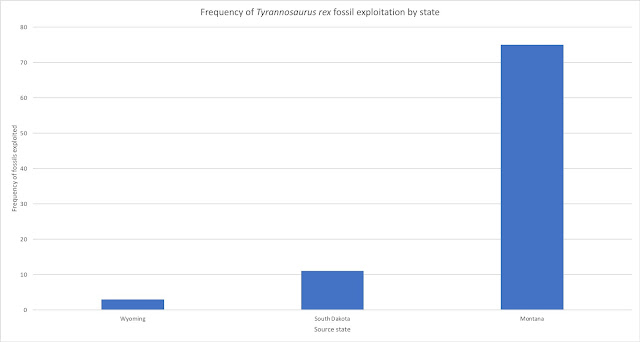 Within Montana, T. rex fossils are primarily collected from Carter County and Dawson County. Garfield, McCone, and Powder River counties are also exploited, but less frequently. The high frequency in Carter County is alarming to me, since that is where I do my fieldwork on public lands. 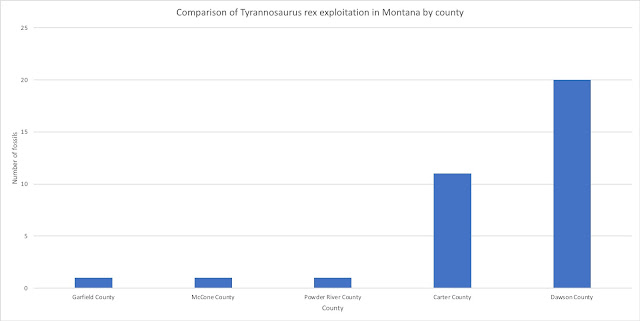 Which parts of T. rex are for sale?

Tooth fragments, teeth, and unidentifiable bone fragments are the primary items sold. In contrast, identifiable parts of the rest of the skeleton (from skull fragments to unguals) are numerically infrequent. 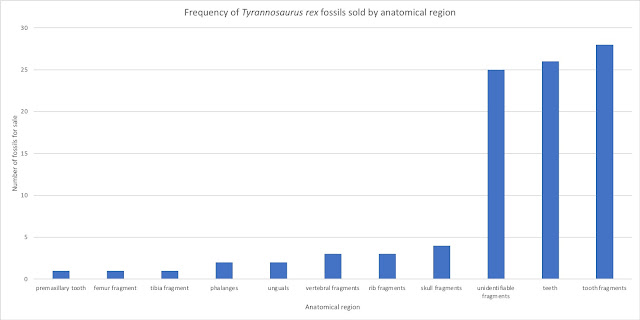 For how much are T. rex parts sold?

The total amount of the 96 fossils in this survey sums to $51,777.96 USD. A comparison of the maximum prices of T. rex fossils shows that, in descending order, teeth, unguals, skull fragments, tooth fragments, and premaxillary teeth are the most highly priced. It is these fossils that break past the $1,000.00 USD price barrier, making these high value items the most vulnerable to being lost to science. 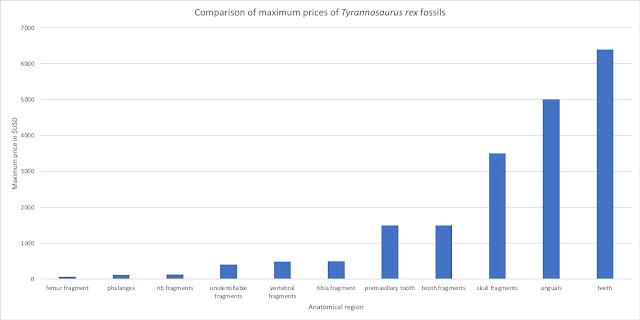 Is there a correlation between size and price of T. rex teeth?

A correlation coefficient of 0.57 was obtained from a quantitative comparison of the data for tooth height and price, indicating a positive correlation. That result means, generally, large teeth are more expensive than small teeth. A single outlier, a 37-millimeter tooth fragment on offer for $6,395 USD was excluded from the comparison; the range in price of the other teeth is from $24 to $2,000 USD. 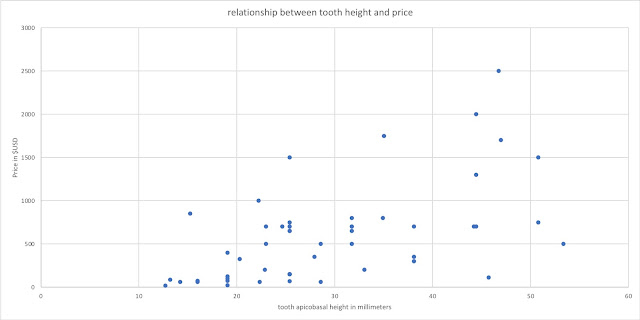 From where are the T. rex fossils sold?

Most of the fossils (94 of 96) are sold from the continental United States, whereas one fossil each is on offer from Singapore and the United Kingdom.

Despite the fact that the fossils are exploited from only three states, within the US the sellers are as numerous as they are far-flung, from the west coast (California), the east coast (New York), Appalachia (Pennsylvania, West Virginia), the southwest (Arizona, Oklahoma, Texas), the Midwest (Minnesota), the west (Montana, Idaho, South Dakota), the southeast (Florida, South Carolina), the south (Alabama, Tennessee), and the Rocky Mountain Region (Utah). Most of the fossils are sold from (in descending order) Texas, Arizona, and Idaho. 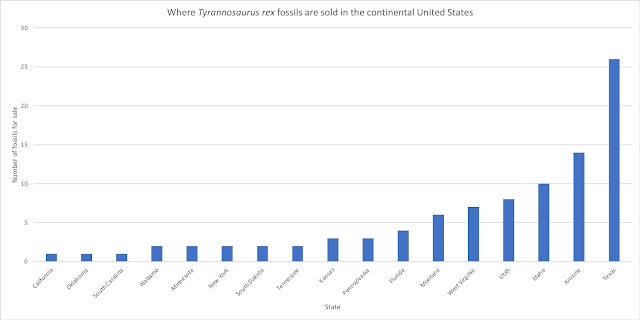 Are the fossils actually T. rex?

Having summarized the primary data, it is now reasonable to ask: do the sellers actually know what they have? In most cases they do, except for the identifications of the skull bones, which, in my opinion, are too incomplete to identify with any accuracy, whereas another complete, identifiable bone is clearly not a dinosaur, let alone T. rex. This means that the sellers in some cases, at best, do not know what it is they have, or, at worst, they are misrepresenting the identification to boost the price.

The cost upon science of nickel-and-diming T. rex fossils

These fossils will never make it into a university or museum collection; the information they contain will never be recovered, and the public will not see them. In my fieldwork, these sorts of fossils are important for documenting the stratigraphic distribution of T. rex, the species richness and ecological structure throughout the section, the taphonomy of localities, isotopic ratios of tooth enamel, population structure, ontogeny, and so on. Scientifically, there's a tremendous amount of information about the last million years of the Age of Dinosaurs to be gained by careful collection, documentation, and study of fragmentary bones and isolated teeth.

This nickel-and-diming of T. rex fossils has two immediate effects: it provides incentive for the commercial trade to exploit dinosaur fossils for profit and it reinforces the indifference of the general culture to the problem of the fossil trade. If people really cared about this exploitation, the sellers would, presumably, be run off the platform. Unfortunately the steady stream of fossils that is trickling away from science is evidence that society has yet to respond to this situation for the problem that it really is.