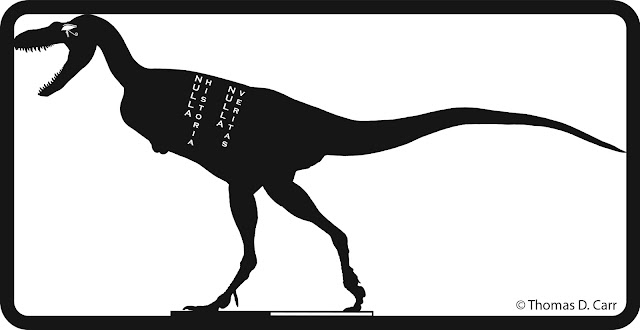 Tyrannosaurus rex is hit very hard by the dinosaur fossil trade; to it approximately half of the sample size has been lost.

How has the most famous and fearsome extinct animal of all time so utterly slipped from the hands of science?

In June of this year I published an extensive study of growth in T. rex based on a sample of 41 scientifically available specimens (Carr, 2020); that is, specimens in the collections of public trusts. There’s several more fossils in public trusts that weren’t included in my study, which brings the number up to 57.

Fifty-seven T. rex specimens sounds pretty good, but that is marginally over half of the potential sample size: there’s at least another 43 in the stockrooms of commercial fossil hunters and in the collections of private collectors who buy them. That means our knowledge of T. rex is half of what it could be because the fossil market has deprived science of half the information.

The study of vertebrate fossils follows ethical guidelines formulated in our corner of the scientific community. To ensure replication of our observations (the universal cornerstone of science), the fossils we study should be accessioned into the permanent collection of a public trust, which in the United States is an accredited museum or university collection. Fossils in private hands lack every protection that a bona fide public trust can provide and so it is unethical to study and publish on them. The recent multimillion dollar auction of the T. rex nicknamed Stan, to an as-yet unknown buyer, is a dire example of why that ethical guideline should be followed given that the fossil had no shield from the legal entanglements of a family conflict (Thompson, 2020).

In order to give you a sense of how bad the situation really is for T. rex, I share here with you numbers based on my own records of commercially held (and brokered) and privately owned T. rex fossils. My sources of information on commercial specimens include published articles (Larson, 2008), auction catalogs, online sources, and, in a few cases, word-of-mouth. I am not interested in naming and shaming, so I will not make publicly available my list of the commercial and private specimens; instead I will keep the focus on the story that the numbers tell.

How many T. rex are in private and commercial hands?

At my latest count, there are 57 specimens (from complete skeletons to single bones and teeth) in public trusts; the count of single bones and teeth are limited to those that I have published, since there are hundreds more of them in museum collections. There are at least 43 specimens (complete to partial skeletons, isolated jaw bones) of T. rex in commercial and private hands (Figure 1).

The count of 43 is an underestimate, because secrecy often surrounds commercially-held T. rex fossils; for example, I will see media reports of previously unheard-of specimens that pop up every six months or so, especially if there is a legal dispute over a fossil or if a skeleton went on public display. On occasion, purely by happenstance, I have learned of important but commercially held T. rex fossils from people who saw a specimen that is otherwise unknown beyond a small circle. Therefore, it is reasonable to infer that the actual number of commercially- and privately-held T. rex fossils must be much higher than my count, but it at least can be said that nearly half of the scientifically informative specimens of T. rex are currently out of the reach of science.

In science, sample size is everything: imagine if our entire knowledge of people was based on only 60 skeletons, where most were adults, we had only a few scraps of teenagers, and of children we had only one skeleton, a skull, and a few bones and teeth. Based on that, we’d know very little about the growth and skeletal biology of people; also, we’d lack a rigorous baseline of data that would enable the study of our evolution among our closest relatives. That situation precisely describes the current scientifically-available sample of T. rex.

To accurately understand the growth changes of T. rex, say, during each major growth stage, or, better yet, during each year, we’d want enough skeletons to capture the entire growth series. That level of knowledge requires a large sample size – in other words, more skeletons! For most living species that occur in abundance, acquiring a large sample size for each year of growth is straightforward, but for rare fossil species, like T. rex, it isn’t.

A statistically rigorous sample size for T. rex would be 30 skeletons for each year of life. Why 30? Nature is messy, and in skeletons that messiness is expressed as variation (i.e., noise) whereas what we’re after is the true pattern of growth (i.e., signal). Generally, a sample size of 30 is sufficient to distinguish between signal and noise.

Therefore, for the main growth stages (juvenile, subadult, young adult, adult, senescent adult) we'd need 150 specimens (30 specimens x 5 growth stages), or, at the other end of the spectrum, we’d need 900 T. rex skeletons (30 specimens x 30 years) to really nail down its year-to-year growth changes. I am well aware that virtually no dinosaur species reaches these sorts of numbers, but the point is that every fossil matters if we're to really understand their growth, biology, ecology, and evolution.

My research focuses on the growth of T. rex and its close tyrannosaurid relatives. In my study of T. rex, I found that the growth stages represented by the fewest specimens are the small juveniles and subadults. By my count, a fifth of the commercially- and privately held specimens (i.e., nine fossils) represent those rare growth stages, which, if in public trusts, would greatly improve our understanding of how T. rex grew up and evolved (Figure 2).

In which parts of the American West is T. rex most exploited?

According to my tally of the locations where 34 T. rex commercially obtained specimens were found, South Dakota and Montana are the most seriously hit, each with 14 specimens taken (Figure 3). The situation is less severe, but persistent, in Wyoming (four specimens) and North Dakota (2 specimens).

It is notable that the commercial exploitation of T. rex is limited to the Northern Rocky Mountain Region, whereas fossils are not exploited south of Wyoming. This exclusivity may simply be a function of the extensive exposures of the Hell Creek Formation (and equivalents) in the north, the scale of properties upon them, and, perhaps, a high density of commercial outfits, large and small, operating out of South Dakota and Montana.

How many commercially obtained T. rex have made it into public trusts?

It has been claimed that commercially collected T. rex fossils inevitably make it into public trusts. This is simply not true – by my count, only seven specimens (Bucky, Wyrex, Trix, Sue and two associated T. rex bones, a partial juvenile dentary) are in public trusts.

Figure 4 shows that when Sue and its associated fossils (a lacrimal bone from a juvenile and a partial tibia from a subadult) are counted separately, 14% of commercially collected T. rex fossils made their way into a museum; in contrast, if the Sue locality fossils are counted together, then, arguably, the proportion is only 10%. Either way, science is deprived of the vast majority, from 86- to 90% of the specimens.

How does the intensity of commercial exploitation of T. rex compare with that of public trusts?

Collection of T. rex fossils by public trusts began in 1892, with the American Museum of Natural History. This activity persisted into the early 1900s, and then stopped. Collection spottily resumed in the 1940s and 1950s that led to the discovery of the infamous Cleveland skull in 1942. After that, forays made by museums ceased until the 1960s, which have continued regularly to the present day (Figure 5).

Over that 128 years of collection, on average, 0.4 scientifically significant T. rex fossils were found each year. Since the 1960s the rate has increased to 0.7 fossils per year.

Based on these data, the commercial market in dinosaur fossils, particularly T. rex, is a very recent phenomenon that has rapidly flushed out half of the sample size away from science.

Tyrannosaurus rex is only for the one per cent

It makes me flinch when I hear colleagues breezily discuss the “going market value” of a T. rex, so the worst moment of the Christie’s auction for me (I watched it live online) happened at the end of the affair when a commentator remarked, “Now we know the price of a T. rex - $27.5M.” A comparison of the prices paid for T. rex skeletons shows that people will pay from $5M- to $31.8M USD, with a mean of $14M USD (Figure 6). With prices like that, no museum can alone compete with private interests that will aggressively pursue a bid.

In total, these numbers show that over the past 30 years, the commercial exploitation of T. rex fossils has done no favors for science:

(1) The sample size is effectively halved.

(2) The Northern Rocky Mountain Region is cleaned out on an annual basis.

(3) Public trusts are limited to collecting on public lands.

(5) The market for adult skeletons is accessible only to millionaires.

During the last 30 years of the 115 that it has been known to science, Tyrannosaurus rex has been plundered by commercial exploitation, with no end in sight. This situation doesn’t need to continue, does it?