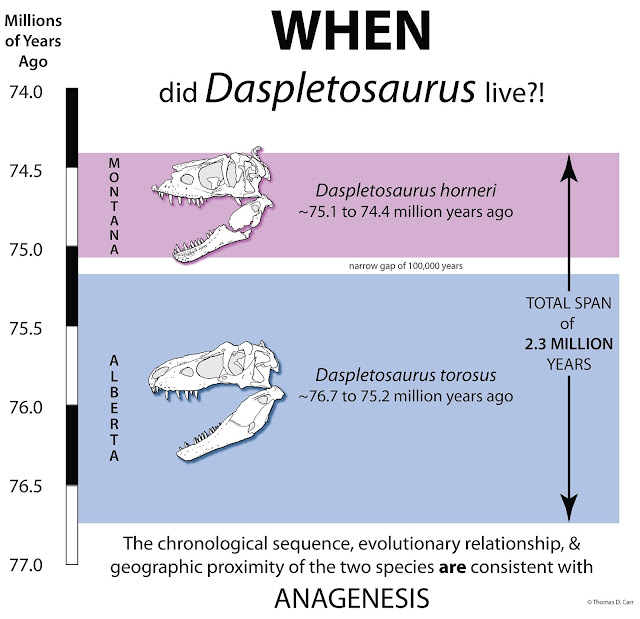 Cladogenesis is implied by the structure of cladograms that show hypothetical ancestors dichotomously splitting into descendant lineages. Although cladistic analyses may accurately show sister group relationships (recent common ancestry), the branching pattern may not map onto the actual speciation mode. Therefore, it is reasonable to assess whether or not anagenesis is a defensible hypothesis as the explanatory speciation mode.

In our view, there are four criteria that must be satisfied in order to propose a hypothesis of anagenesis. What follows is an explication for each.

Horner et al. (1992) proposed that Tyrannosaurus rex was the culmination of the D. torosus -> D. horneri -> T. rex anagenetic series. However, in our phylogeny we recovered T. rex as the sister species of T. bataar, which are situated in a separate branch of the tyrannosaurine family tree. Therefore, T. rex cannot be considered as part of the Daspletosaurus lineage, since it actually belongs to another clade; as such, T. rex is excluded from this hypothesis of anagenesis.

2. The candidate species must occur on the same land area or on adjacent land areas.

If a candidate ancestral species is found, say, on the opposite side of the world or on a different hemisphere, relative to the descendant species, then this would weaken a hypothesis of anagenesis, especially if the species are successive in time. The reason for this is that distance is evidence for the time taken for descendants to leave the ancestral area: a greater distance implies a greater time taken.

Both species of Daspletosaurus are from the northern Rocky Mountain Region, from what is now Alberta (D. torosus) and Montana (D. horneri), and so they satisfy the requirement for occurrence in the same land area (at the regional level).

3. The candidate species must be successive in time.

D. torosus lived earlier than D. horneri (see the diagram above), which does not conflict with the sister group relationship between the species. Alternatively, it is absurd to suggest that the geologically younger D. horneri is the ancestor of the older D. torosus.

4. The sister group relationships of the candidate species must not conflict with their chronological sequence.

With the hypothesis of Horner et al. (1992) in mind, although D. horneri does precede T. rex, the suggestion that D. horneri is the ancestor and T. rex is the descendant, violates their actual evolutionary relationship, where they are separated from each other by several ancestors; i.e., they are on separate branches of the tyrannosaurine family tree. The sister group relationship between D. torosus and D. horneri does not conflict with the chronological sequence of the species.

There are cases where all of these criteria may be satisfied, but the hypothesis of anagenesis may be weak, and so we may introduce the idea of levels of inference.

The first level of inference applies to cases that satisfy all of the criteria, if and only if the distance in space (criterion #2) is absent or minimal, and time (criterion #3) is brief. Daspletosaurus is an example of a level 1 inference because the land areas are adjacent (on a sublandmass scale) and the time separating them is a narrow 100,000 years, and the entire span of the lineage is relatively short, 2.3 million years.

We proposed another anagenetic lineage that is a second level inference, namely, the Zhuchengtyrannus magnus -> T. bataar -> T. rex series. At issue here is the total time span, where 73.5 Mya (Z. magnus) – 66.0 Mya (T. rex) = 7.5 Myr, which is represented by only three species, and gives each an extraordinary lifespan of 2.5 Myr. In this scenario, it is predictable that additional close relatives will be found in that long stretch of time, from which only three narrow slices are known. Intuitively there is no guarantee that any new species, once discovered, will not have sister group relationships with the others that conflict with anagenesis.

The third level of inference applies to cases that satisfy all criteria, except the criteria of time and space are pushed to extremes, but stop short of being unreasonable.