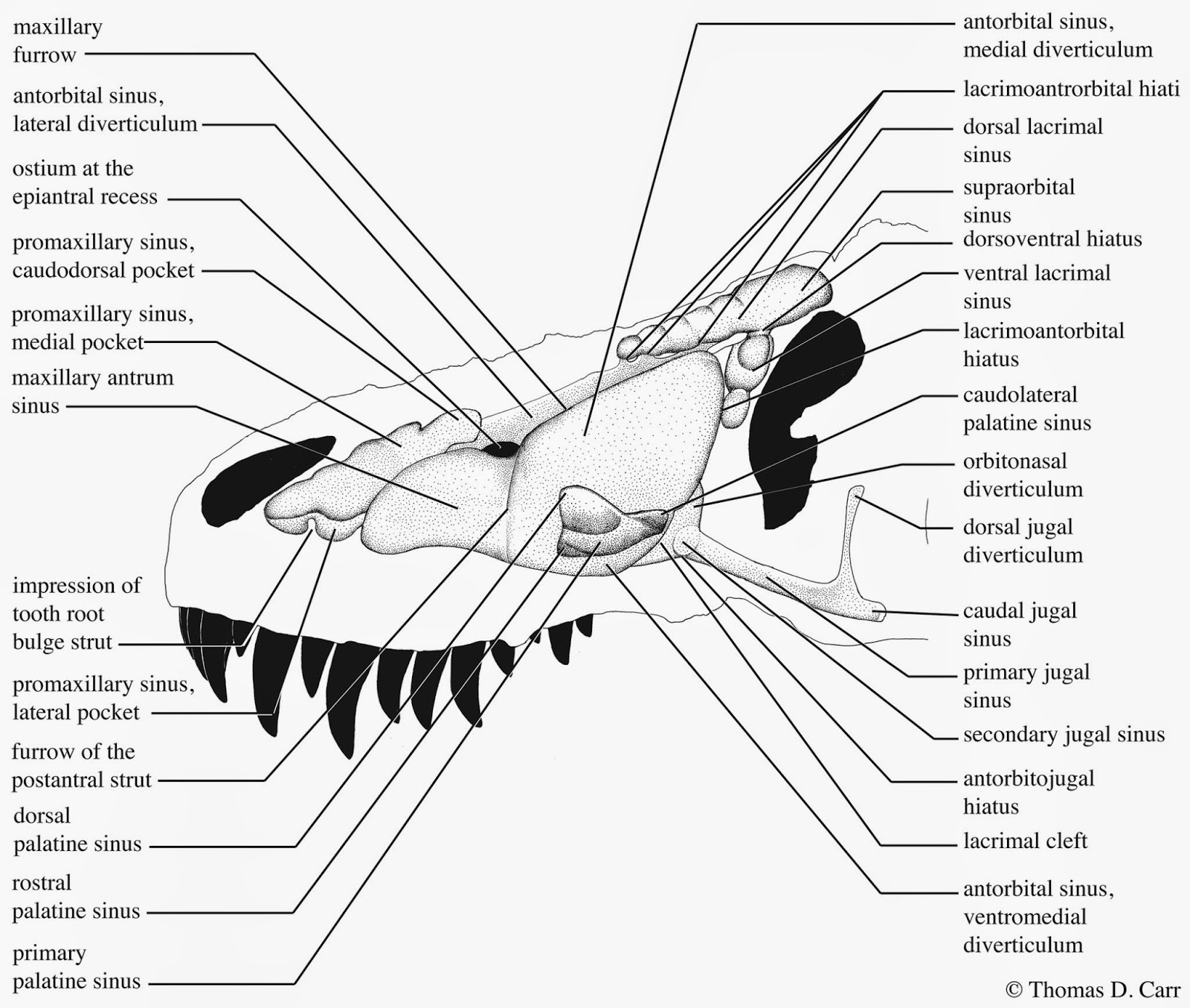 The paranasal sinus and its diverticula of Tyrannosaurus rex, medial view. This reconstruction is based on casts of AMNH FARB 5027, MOR 555, UCMP 118742, and a cf. Albertosaurus libratus specimen, ROM 1422.

Today I resumed an unsuccessful search for a line drawing that I drew of a bird basicranium during my PhD candidate years; instead I came across a file containing illustrations from my Master's degree days. The file contained many line drawings that I did for a 60+ page term paper for my Comparative Anatomy of the Vertebrates course - the assignment was for a 10-page paper; when I beamingly gave my work to the prof, he looked pained and asked "What am I supposed to do with this - read it?!" After working as a prof for a decade, I don't blame him for that reaction at all.

The paper described in loving, subinfinite detail the internal structures - the bony cavities and the soft tissue air sacs that filled them - of the bony paranasal and basisphenoid sinuses of tyrannosaurids. The work culminated in a reconstruction of the air sacs that filled the bony spaces as they would have appeared in Tyrannosaurus rex. One of those illustrations is reproduced here; the labels did not appear in the original work. The names of the structures have not been formalized; I included them here to help place the balloon like structures in the skull with ease.

The main goal of my term paper was to show the antorbital air sac and its subordinate system of interconnected diverticulae. Therefore, the primary nasal airway (that extends from the external naris to the choana) is not shown; that is why an ostium (connecting hole) is shown at the position of the epiantral recess, as if the airway has been cut away from the system of paranasal air sacs that extend from it laterally. The placement of the ostium is nearly arbitrary; it is one discrete location where the nasal airway directly enters the facial skeleton without the intermediary of the antorbital sinus, which is limited caudal to that opening in the medial wall of the bony maxillary sinus.

This exercise in reconstruction was done purely based on the topography of the bony signatures left by the diverticulae, assuming that the antorbital sinus had a balloon like form, lodged on the lateral and medial sides of the internal antorbital fenestra. That assumption was intended to be a heuristic starting point for the reconstruction.

My secondary goal was to show the impressions left on the air sac system by the bony enclosure, which consists of deep pockets, bulges, constrictions, and bladelike ridges. I imagined that the air sac system, shown whole and freed of the bones, would resemble corrosion casts of bird lungs that are deeply dissected by the buttresses of the lungs and vertebrae into surrealistic pulmonary baskets. This was a short time before endocasts of dinosaur fossils became fashionable in the scientific literature.
Posted by Thomas Carr at 10:40 PM